Nowadays, digitalisation has become one of the top concerns for banks. ​​As a leading example of services digitalisation, SpareBank 1 shows up in the Norwegian banking scenario as an important case study. For that reason, IFB invited Baard Slaattelid, the Executive Vice President for Banking as a Service, and Øystein Bortne, Head of Market Research, to talk about the SpareBank 1 experience in this field.

Join this Conference and make sure you will be a step ahead on Banking Digitalisation. 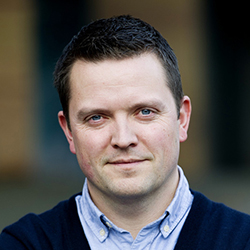 Is the Executive Vice President for Banking as a Service at SpareBank 1, Norway’s second largest banking group. He leads the group’s initiatives in creating new business opportunities together with third parties.

Baard has been with SpareBank 1 since 2009 and has held several key roles during what has been a journey of great change for the group. He was Head of Online and Mobile banking, working to influence how customers use their bank on a daily basis, on their smartphones and on wearable devices. He was also Chief Product Officer at mCASH, the mobile payments solution that SpareBank 1 acquired from the Norwegian FinTech company mCASH AS (now Auka AS), which later merged with Norwegian market leader Vipps in a joint venture between 106 Norwegian banks.

Baard’s approach to digitalisation in banking centers around creating simple, usable solutions that create value for both the customer and the bank.

Is Head of Market Research in SpareBank 1, Norway’s second largest banking group. Øystein has been with SpareBank 1 since 2007, and has held the current position since 2010. Øystein has broad perspective on market research, focusing on quantitative methodology and survey-based techniques, but also on developing qualitative techniques in order to enhance the understanding of consumer behavior in a market in rapid change, such as banking. Over the years he has given hundreds of presentations within SpareBank 1 about the current trends in the market and on SpareBank 1’s position. He is also an advisor on market strategy and positioning, and since 2010 Øystein has been a permanent member of the Market Strategy Council in SpareBank 1.

LOCATION: To be defined