Governance and the Future of Banking - IFB

Governance and the Future of Banking

The bank of the future will integrate disruptive technologies with an ecosystem of partners to transform their business and achieve growth. 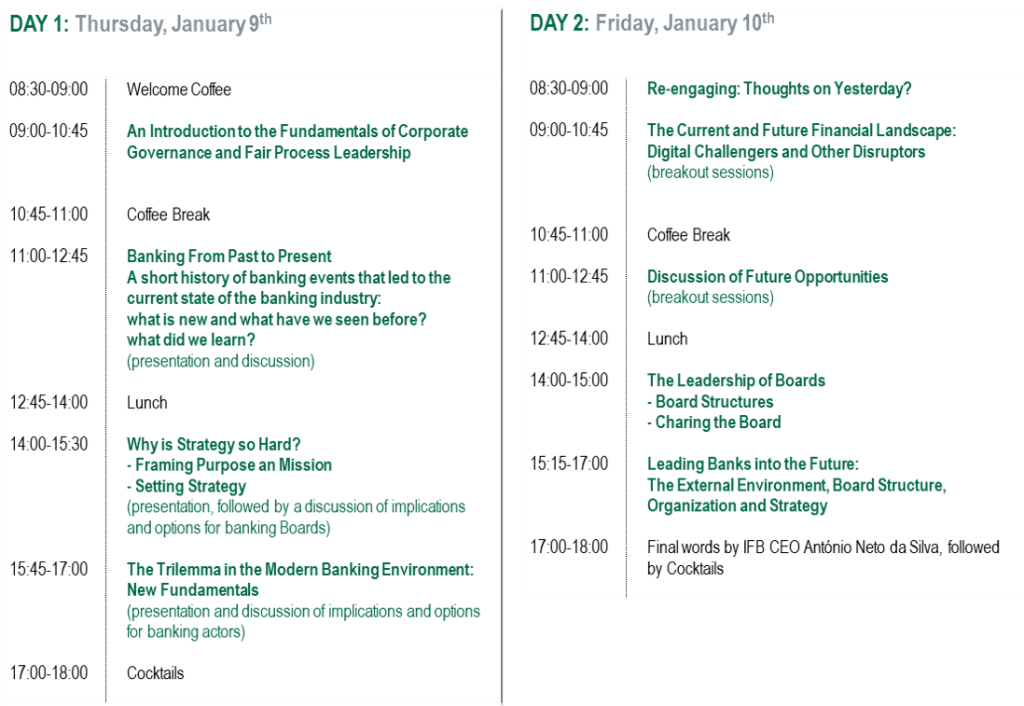 Professor of Technology and Operations Management at INSEAD since 1988 and INSEAD Chaired Professor in Corporate Governance since October 2010. Emeritus since September 2018.

Founding Academic Director of INSEAD’s Corporate Governance Centre and, with colleagues, co-founded the International Directors Programme, the Modern Governance in Banking and the Value Creation for Owners and Directors programs.

First (and only) holder of the Wendel Chair in the Large Family Firm, initiated INSEAD’s activities in family business. Led to the creation of the Wendel international Centre for Family Enterprise at INSEAD. Also held the Solvay Chair in Technological Innovation and the Mubadala Chair in Corporate Governance and Strategy. Received several Outstanding MBA Core Teacher Awards, an Outstanding Service Award in Executive Education, and an Outstanding Contribution Award to Executive Education.  Honorary Alumnus of the INSEAD International Alumni Association. The King of Belgium appointed him Officer of the Order of Leopold in 1996.

Recipient of the Mercurius Award from the Federation of Belgian Distributors for his work (with Professor Arnd Huchzermeier of WHU, Koblenz) on the introduction of the Euro. Received (with M. Pich and N. Harlé) the ECCH European Case Award 2003 for the Marks & Spencer and Zara case. With INSEAD colleagues, he is the recipient of the Family Business Network 2006 Research Award for the article Striving for Justice in Family Firms, as well as a co-author of Industrial Excellence, a book that identifies better manufacturing practices in French and German factories. Published in many journals.

Sits on the Supervisory Board of Naftogaz of Ukraine and is the Chairman of the Board of Seisquare, a software company for estimating natural resource reserves.  He also is a member of the Advisory Board of Bencis Capital Partners and a co-founder of the Association des Plantes Aromatiques et Médicinales, which supports the restart of essential oils production in Milly-la-Forêt.

Provides strategic, corporate governance and restructuring advice to global financial institutions and their boards of directors, central banks, heads of state, and multilateral organizations such as the International Monetary Fund.

Member of Impala Partners LLC since 2009, which is a boutique advisory firm specializing in operational turnarounds and balance sheet restructurings. Member of Kilimanjaro Advisors LLC since 2009 which is the investment manager of a credit fund focusing on senior secured corporate bank-loans primarily in the United States.

Group Chief Risk Officer and Member of the Executive Board, The Royal Bank of Scotland Group from 2007 to 2009. Responsible for group wide credit, market, operational risk management, compliance and regulatory risks. Established and led the Global Restructuring Group and Special Assets Unit “bad bank” that helped chart a course for the institution through the financial crisis.

Member of several private boards of directors, advisory boards and non-for-profits. Former Fellow of the Chartered Institute of Bankers Scotland in 2007.  Founding member of International Financial Risk Institute together with Chief Risk Officers of the thirty largest financial institutions in the world. Certification by CIFE (Centre international de formation européenne) graduate programme in the ”Formation and Integration of European Financial Markets” in 1989.

Adjunct Professor at INSEAD and Fellow of the INSEAD Corporate Governance Center. Co-Founder of the Modern Governance in Banking program (International Directors in Banking Program).  Regular lecturer on restructuring and governance at MBA and Executive levels.